3rd place in World at MOSWC 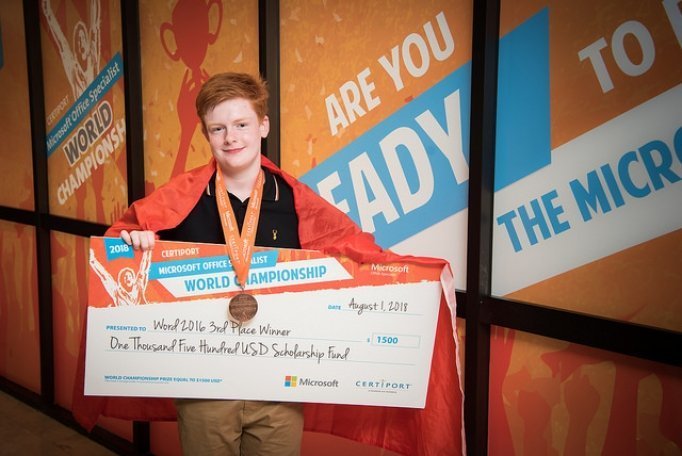 3rd place in World at MOSWC

The winners of the 2018 Microsoft Office Specialist World Championship have been announced by Certiport, the leading provider of performance-based IT certification exams that accelerate academic and career opportunities for learners.  Isle of Man student Adam Drummond has been named the bronze medalist for Microsoft Word® 2016, taking home a cheque for $1,500.

Adam was sponsored by Certiport partner Prodigy Learning after winning the MOS Four Nations Championship Final. He qualified as the UK & Ireland Champion, winning the opportunity to travel to compete in the World Championship Final in Orlando along with Excel finalist Christopher Doyle, (University College Dublin, Ireland) and PowerPoint finalist, Michaela Habartova (University of St Andrew’s, Scotland).
“Congratulations to Adam – this is a fantastic achievement and he has been a great ambassador for the Isle of Man as well as the entire UK & Ireland region” said Andrew Flood (CEO, Prodigy Learning).  “The MOS Four Nations Championship is the highlight of our year, showcasing the best digital skills in the UK & Ireland.  We’re delighted to see Adam continue the region’s history of success in the World Championship and are already looking forward to next year.”

In its 17th year the competition attracted more than 760,000 candidates from 116 countries, a 35 percent increase in participation year-over-year.  Students entered to prove their superior skills in Microsoft Word, Excel, and PowerPoint, culminating the most popular technology skills competition on Microsoft Office and the only one endorsed by Microsoft since its inception in 2002.

To enter the competition, students age 13 to 22 took a qualifying Microsoft Office Specialist (MOS) certification exam to demonstrate their mastery of Microsoft Office products.  Regional competitions were held worldwide and 152 student finalists from 51 countries competed in the final round of competition in Orlando, Florida, USA from July 29 – August 1, 2018.

In the concluding round, competitors participated in unique project-based tests to demonstrate their ability to create documents, spreadsheets, and presentations for the information presented in Word, Excel, and PowerPoint. Certiport and Microsoft recognized the top student competitors at the MOSWC Student Awards Ceremony at the Hilton Orlando Lake Buena Vista in Orlando, Florida and presented each first-place winner with a $7,000 cash prize.

“The Microsoft Office Specialist World Championship is truly a moving experience – not only because these students are thrilled to compete, but because their lives have been changed by certification,” said Ray Murray, Vice President, Business Development, Pearson VUE.  “Every person who earns MOS certification has demonstrated the ability to command the full features and functionality of Microsoft Office, preparing them for future academic or workforce opportunities.  The MOS World Championship allows us to celebrate that accomplishment and motivate students on a global scale.”

With 2.3 million certifications delivered annually, MOS is the world’s largest IT certification program. MOS is the only official Microsoft-recognised certification for Microsoft Office globally and serves as a powerful instrument for assessing student skills and preparing students for real-world application.

“We are very impressed with the winners of the MOS World Championship and grateful to meet so many young people who have realized the power of Microsoft Office skills for productivity and employability,” said Anthony Salcito, Vice President, Worldwide Education – Microsoft. “MOS certification gives students tangible proof they know how to use Microsoft Office tools in academics and on the job from day one.”

Next year, Certiport will host the 2019 MOS World Championship at the New York Marriott Marquis in New York City, NY from July 28-31, 2019.