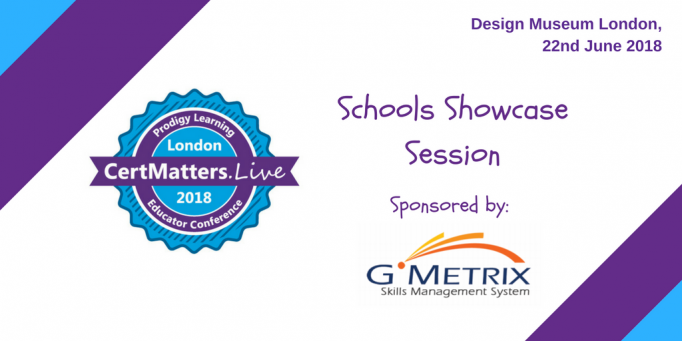 We are delighted that the Schools Showcase Session was sponsored by our partners, GMetrix. A special thank you to our speakers in this session: Martyn Silezin, James Protheroe, Rhys Jones, Ayo Ogunrekun and Sweety Rekhi.

Martyn Silezin (14-19 Strategy Officer, Rhondda Cynon Taf Borough Council (RCT))
Martyn was educated in London and Cambridge, Martyn has thirty years teaching experience.  Of these, sixteen were at senior leadership level.  He has spent the last six years as a senior officer with Rhondda Cynon Taf and has been heavily involved in reshaping the education environment in the area. Martyn is also the lead for the Microsoft Imagine Academy in Rhondda Cynon Taf .

James Protheroe (Assistant Headteacher, Darran Park Primary School)
James is one of the main developers with the Prodigy STEAM in Minecraft:EE vision. James is affectionally known as the ‘Minecraft Magician’ to many. Over the last three years James has been working with educators from across the world, using Minecraft to develop unique collaborative experiences.

In 2015 James led one of the UK’s largest scale Minecraft project – Black Gold: Hearts, Souls and Mines. In this project pupils developed their understanding of the coal industry in South Wales by building a working coal mine based on the Rhondda Heritage Park. James was asked to present this project at E2: Hack the Classroom in March 2016.

Another Minecraft project James led was: The Wonderful World of Roald Dahl, designed to celebrate Roald Dahl’s 100th birthday whilst developing reading and writing skills. 95 schools from across the world engaged with Roald Dahl’s most famous settings by creating them using Minecraft. Pupils them developed their writing skills by designing their won innovative narratives based on Roald Dahl’s settings.

During its Estyn inspection in 2016 Treorchy Comprehensive School received an excellent Estyn report building upon the 2012 inspection when it became the first secondary school in Wales to be judged as being ‘Excellent’ in all 15 elements inspected.  In addition, the school also became the first in Wales to be reaccredited with the NACE Challenge Award for excellence in provision for More Able and Talented Pupils.

IT, along with excellent pedagogy, has the potential to transform education and support pupils in achieving their potential. With this in mind the school was recognised and became the only Microsoft Training Academy in Wales and has been working with schools to develop the use of technology in the classroom.

Ayo Ogunrekun (Teacher of Computer Science & IT Apprenticeship Coordinator, The Leigh UTC)
Ayo is an entrepreneur, a digital evangelist, a coach, a mentor, and also a YouTuber with over 7K subscribers. He is also a Teacher of Computer Science at The Leigh UTC, founder of One Idea Consultancy Ltd and co-founder of a cloud based bespoke web developing and managing technology company, CreateMyMobile.

Sweety Rekhi (Director of Learning and Teacher of Computer Science, The Leigh UTC)
Sweety is currently the Director of Computer Science at The Leigh UTC. She is a Bachelor of Commerce as well as a Post graduate in Computer Applications. She is also a teacher, a mentor, a programmer and a website developer. She believes in getting the best of students as their success thrives her.