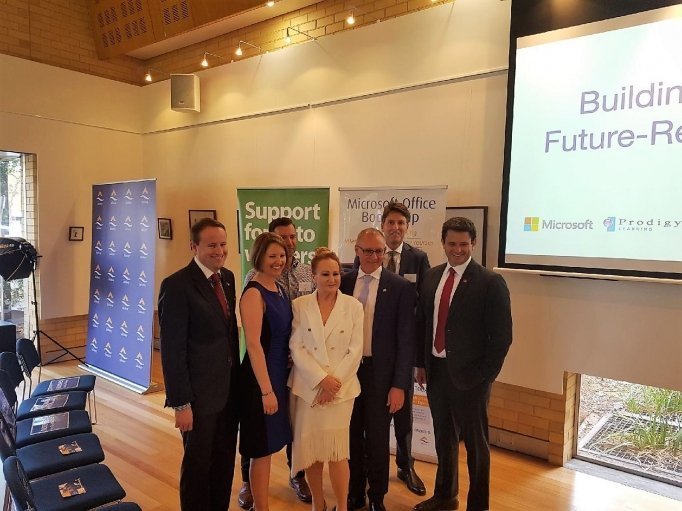 Today Microsoft Australia announced its commitment to helping Australians develop the skills required to thrive in the digital age, with the launch of its National Skills Program.

The initiative was officially launched today in South Australia where Microsoft has partnered on a pilot program with the Department of State Development, the City of Salisbury and Prodigy Learning to provide digital skills to automotive supply chain workers whose roles were displaced by the closure of the Holden manufacturing plant in Elizabeth in late 2017.

The announcement of Microsoft’s National Skills Program is coupled with the release of a report titled Building Australia’s future-ready workforce, which includes recommendations on how Australia can prepare for a digital future by helping those already working in traditional jobs transition to more tech-powered roles.

“Equipping the nation to succeed in the digital age – and ensuring all Australians benefit from it – must be an urgent national priority if Australia is to remain competitive and maintain its record-breaking 26 years of economic growth,” commented Steven Worrall (Managing Director, Microsoft Australia).

Keeping pace in a digital age
Microsoft’s National Skills Program focuses on helping adults already in the workforce and disadvantaged groups most in danger of falling behind as the economy becomes more and more technology-driven.

It will include several pilot programs which Microsoft will deliver in partnership with other organisations in both the private and public sectors. The pilots are designed to understand which approaches are most effective and then collaborate with others to scale up effective measures that have a broad and lasting impact.

“Digital technologies are changing the nature of work and Australia’s economy. It’s our priority to help people navigate the threats and opportunities presented by the digital revolution, which is being driven by the growth of cloud computing, artificial intelligence (AI) and machine learning, among other powerful innovations,” said Worrall.

The National Skills Program will also complement – and draw on – similar programs being run by Microsoft internationally. For instance, Microsoft in the United Kingdom is providing free digital skills training for public sector workers and has created 11,000 digital apprenticeships as part of the British government’s new industrial strategy.

Empowering the community
Microsoft, the South Australian Government, the City of Salisbury and Prodigy Learning will deliver the first pilot within Microsoft’s National Skills Program to individuals displaced by the recent closure of the local car manufacturing industry.

Participants in the pilot will have access to digital skills training and Microsoft certifications. In addition, they will attend a two-day workshop to help them identify a personal business plan and career path and the new skills they need to help them find meaningful employment

The training and certifications will be delivered by Prodigy Learning, a global training partner for Microsoft, who will also design a digital foundations course to meet local worker requirements.

“It’s clear that Australia’s future economic success is dependent on a digital-ready workforce. In collaboration with the government and our partners, we’ve developed the Microsoft National Skills Program with scale in mind, to ensure the impact is widespread across our community. We are keen to learn from and engage with other organisations to help workers across all sectors, and those wanting to enter the workforce, gain new skills for the digital economy,” said Worrall.

Premier of South Australia, Jay Weatherill said, “Jobs are the number one priority of the State Labor Government.  Alongside Microsoft and the City of Salisbury we are up-skilling former automotive workers, helping them to embrace jobs within new industries.”

Future-proofing Australia
In tandem with the launch of the National Skills Program is the release of Microsoft’s Building Australia’s future-ready workforce report. The directions in the report were informed by a roundtable convened by Microsoft in Sydney in August 2017. The event assembled some of the nation’s most respected thought-leaders in business, education, technology and start-ups.  The report outlines the key areas which must be addressed if Australia is to prepare its workforce for and reap the benefits of a digital future.

“It’s one thing to pay lip service to the skills gap. It’s another to take action to bridge it,” commented Worrall. “This report, in conjunction with the National Skills Program, will provide the blueprint for how we can future-proof Australia and ensure that citizens are embracing digital skills and becoming more confident with technologies that’ll help them achieve progress in their working lives.”

Commenting on the launch, Andrew Flood (CEO, Prodigy Learning) noted: “Prodigy Learning are very proud to be already playing a role in progressing Australia’s economy and building its future-ready workforce through this first pilot of the Microsoft National Skills Program.  We look forward to seeing the impact this first project has in South Australia and working on this Program with Microsoft and other stakeholders to increase focus on digital skills across Australia.”