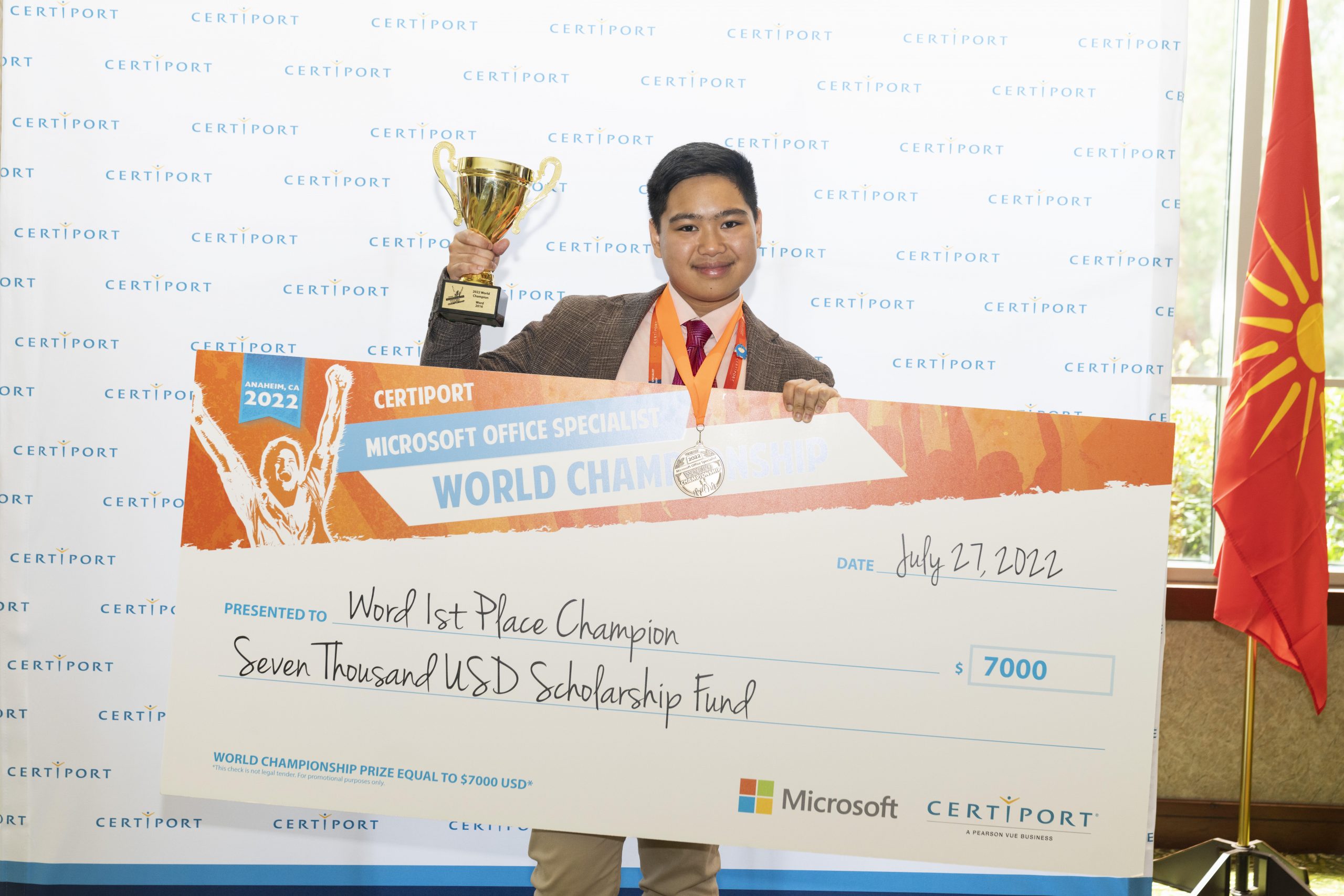 CBS Kilkenny student Rohan won gold at the MOS UK & Ireland Championship final in June. His prize was the opportunity to compete and represent his country at the Microsoft MOS World Championship Final in Disneyland California, a trip of a lifetime, sponsored by Prodigy Learning.

The global competition in its 20th year, attracted more than 200,000 contestants from 100+ countries. To enter the competition, students aged 13 to 22 sat a qualifying Microsoft Office Specialist (MOS) certification exam to prove their superior skills in Microsoft Office Word, Excel, and PowerPoint.

Each finalist alongside other world competitors, participated in unique project-based tests to demonstrate their ability to create documents, spreadsheets, and presentations for the information presented in Word, Excel, and PowerPoint.

“When my teacher first shared the exciting news 6 months ago that I had qualified for the MOS Ireland Championship Final in DreamSpace Microsoft Ireland in May, I could not believe it!” said Rohan, “especially as I had never heard of the competition before”.

“I was even more surprised when I became the MOS UK & Ireland Champion having joined the virtual final day in June from a local internet café in the Philippines at 1am in the morning as I was there celebrating a family event and our accommodation had no Wi-Fi”.

“Travelling to the US and competing at the World Championship final has been a dream come true and I still cannot get over that my name was called out as the Microsoft Word World Champion 2022!”

He added: “In the lead up to the competition I was nervous but so excited to be shoulder to shoulder with the top students in the world representing Ireland. The experience is one I will never forget, I have made lifelong friends, we got to go into the Disney Parks and adding this experience along with MOS Certification will increase my employability when I apply for jobs after school.”

In addition to Rohan’s success, Prodigy Learning also had its highest ranking ever for the UK in the Adobe Certified Professional World Championship Final. Keavey Gamwell came third after impressing judges with her design for non-profit marine conservation organisation, The Ocean Agency, taking home a cheque for $1,500 and the bronze medal. Travelling with Rohan and Keavey to California were Excel finalist Amy Hoey, (Inver College, Ireland) and Australian MOS Finalist, Ethan Wong (University of New South Wales).

With 2.3 million certifications delivered annually, MOS is the world’s largest IT certification program. MOS is the only official Microsoft-recognised certification for Microsoft Office globally and serves as a powerful instrument for assessing student skills and preparing students for real-world application.

“The Microsoft Office Specialist World Championship is a remarkable experience – the students are thrilled to compete, and their lives have been changed by certification,” said Christina Thoresen, Director of Worldwide Education Industry Sales Strategy – Microsoft Corporation. “MOS certification gives students tangible proof they have the skills and know how to use Microsoft Office tools for productivity and employability.”

“Congratulations to Rohan – this is a fantastic achievement, and he has been a great ambassador for our home country, Ireland” said Andrew Flood (CEO, Prodigy Learning). “The MOS UK & Irish Championship is the highlight of our year, showcasing the best digital skills in the UK & Ireland. We’re delighted to see Rohan continue the region’s history of success in the World Championship and are already looking forward to next year.”

Next year, Certiport will host the 2023 MOS World Championship at the Bonnet Creek, JW Marriott in Orlando, Florida from July 30 – August 2, 2023.

Prodigy Learning is an award-winning global EdTech business, providing innovative online platforms that enable learners to develop and prove their skills. The Company was established in 2000 and now has offices in Dublin, Ireland, London, UK, Sydney, Australia and New York, United States.