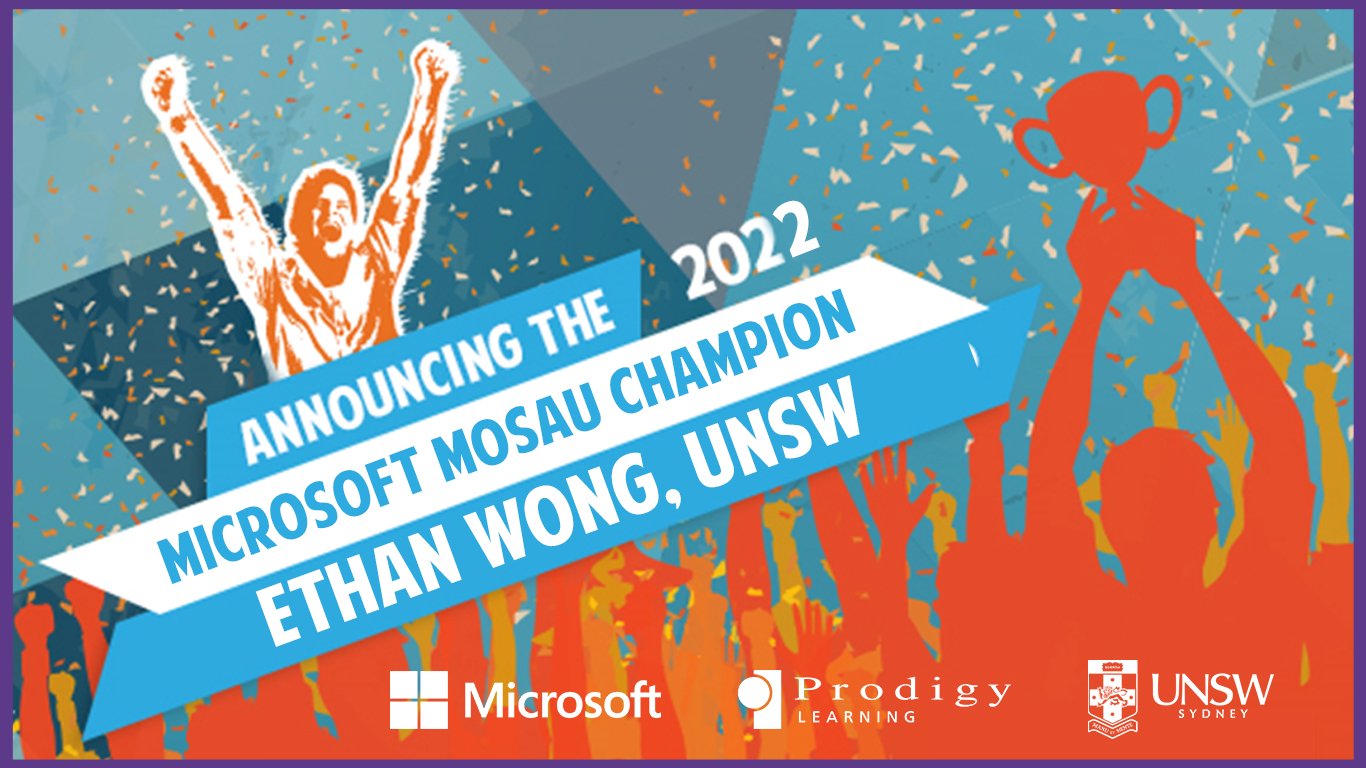 The Microsoft Office Specialist World Championship is an annual global digital skills competition (delivered locally by Prodigy Learning) involving over 760,000 students from 116 countries who compete to be the World number 1 in Word, Excel or PowerPoint.

In this end of year showcase event, Students aged 13 to 22 from across Australia competed with peers to prove their Microsoft Office digital skills. The top 30 students were invited to the 10th of November virtual final where they sat a further Microsoft Office Specialist (MOS) Certification exam to demonstrate their mastery of Office tools.

There could only be one winner and using the top score method, the MOSAU Champion is:

Congratulations to Ethan Wong on an incredible achievement! Not only has Ethan taken home the coveted prize of Microsoft Office Specialist National Champion – Australia, they have also won the opportunity to go on and compete in the MOS World Championship Final in 2022!

“We look forward each year to celebrating the high calibre of finalists who beat 1000s to become national finalists in the MOS Australian Championship,” said Tiffany Wright (Director of Education, Microsoft Australia). “Reaching the final proves these young students have the best Microsoft Office digital skills in the country and I have no doubt that having MOS Certification and this incredible achievement on their CV will allow them to stand out to future employers.”

“With 72% of hiring managers more likely to hire someone with a certification, it is a highlight of our year to host the Australian MOS Championship Final. It is an honour to host these talented students as they compete for the crown of MOS Australian Champion and to win the opportunity of a lifetime to represent the country at the World Championship Final in 2022!” said Andrew Flood (CEO, Prodigy Learning). ‘Congratulations to Ethan on an incredible achievement, we know they will have a very successful future career.’

Prodigy Learning is proud to partner with North Carolina Department of Public Instruction and Microsoft to bring award winning ‘Coding in Minecraft’ credential program to all 340,000 middles school students across the state over the next three-years.

Prodigy Learning wishes our Customers a Happy Christmas and every good wish for the New Year. Thank You for your business in 2021!

Barnardos are announced as the Adobe ACP UK & Ireland Charity Partner for the exciting 2022 Championship.

A rising star in the world of computing from University of Northumbria has been named the winner in the UK-wide Azure Fundamentals Championship 2021. Hosted in partnership with Microsoft – the largest and most recognisable tech company in the world.