The winners beat thousands of student entrants from across the UK & Ireland in Microsoft Office Word, Excel and PowerPoint.
Click Here 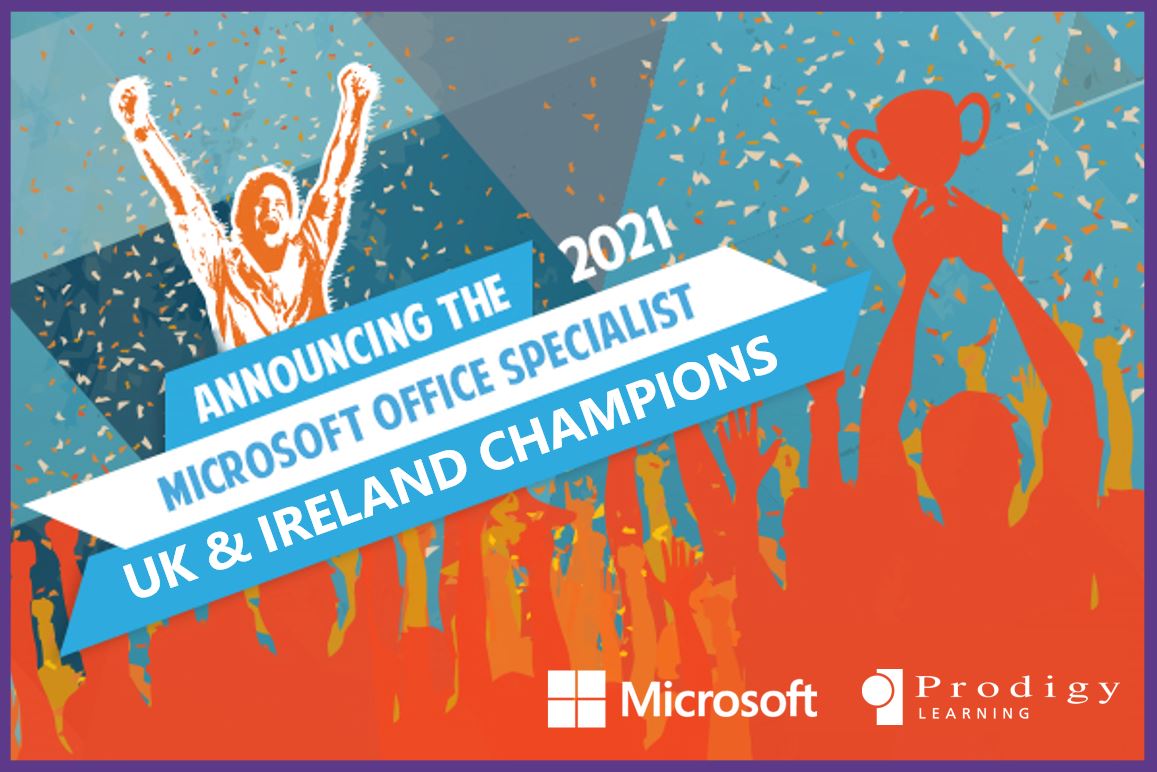 On September 10th, the winners of the 2021 Microsoft Office Specialist (MOS) UK & Ireland
Championship have been announced by Microsoft and Prodigy Learning during an exciting virtual final.

The MOS Championship attracts more than 30,000 test-takers from across the UK & Ireland each year. Students, aged 13 to 22, competed with peers to prove their digital skills in Microsoft Word, Excel and PowerPoint. The top 30 finalists were invited to the final where they sat a Microsoft Office Specialist (MOS) Certification Exam using Certiport’s Exam From Home solution.

There could only be three winners. Using the top score method, the MOS UK & IE Champions 2021 (who each will go on to compete in the virtual MOS World Championship Final in November 2021) are:

Congratulations to all three students on a fantastic achievement!!

“It’s inspiring each year to celebrate the top talented students showcasing their Office Skills in the Microsoft MOS UK & Ireland Championship,” said Chris Rothwell (Director of Education, Microsoft UK). “It is incredibly impressive beating over 30,000 peers from across the UK and Ireland to represent their country in the virtual final, something that they can proudly share with future employers to stand out from the competition. They have earned valuable industry recognised certification representing a bright future for our industry and a solid foundation for the future skilled global workforce.”

“It is an honour to host the best of the best digitally skilled students in the MOS UK & Ireland Championship Final each year. Celebrating hard work, determination and outstanding talent, we are delighted to virtually crown these Champions who will represent the UK & Ireland at the virtual MOS World Championship Final in November 2021. Certification and participation in this final will stand out on their CV’s to employers worldwide as a validation of skills they can use in almost any line of work!” said Andrew Flood (CEO, Prodigy Learning). ‘Congratulations to Ben, Shalini & Jack on a remarkable achievement, we’re excited to see success unfold for these future leaders’’.

Prodigy Learning wishes our Customers a Happy Christmas and every good wish for the New Year. Thank You for your business in 2021!

Barnardos are announced as the Adobe ACP UK & Ireland Charity Partner for the exciting 2022 Championship.

A rising star in the world of computing from University of Northumbria has been named the winner in the UK-wide Azure Fundamentals Championship 2021. Hosted in partnership with Microsoft – the largest and most recognisable tech company in the world.

Prodigy Learning is delighted to be named as a Finalist in the EducationInvestor Awards 2021 in the Ed Tech Provider category.