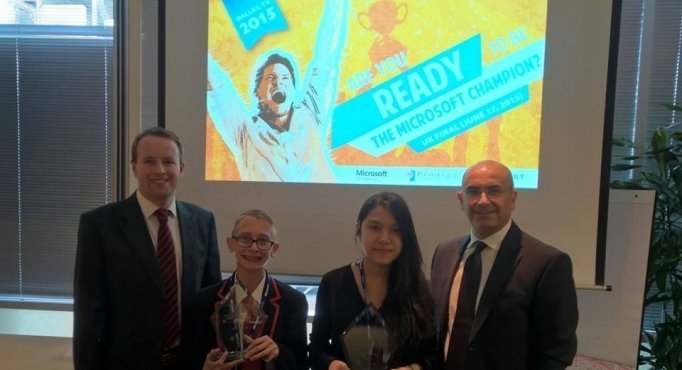 Last week we hosted the 2015 UK Final of the MOS World Championship at Microsoft UK HQ in Reading.  It was a fantastic day at Microsoft, with the 20 UK Finalists hearing from Microsoft, Certiport / Pearson VUE and Prodigy Learning representatives, completing their own Hour of Code and taking their final exams in Word or Excel.  Most importantly, we revealed the Champions and Runners Up for each category:

Congratulations to the UK Champions, their Schools and their Teachers for a fantastic achievement.  Alfie and Linh (the UK Champions) have won the trip of a lifetime to fly the flag for the U.K. at the World Championship in Dallas later this summer.  We wish them the best of luck!  Richard and Logan both left with a Microsoft XBOX One Console and Alex and Nathan won themselves a Microsoft Lumia Phone each.

For a full selection of images from the 2015 UK Final of the MOS World Championship please click here.