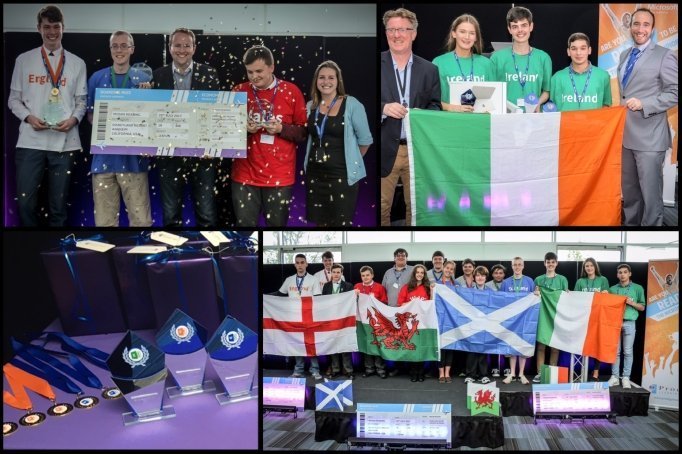 The importance of digital skills in today’s and tomorrow’s job market is indisputable.  Independent research consistently ranks skills in Microsoft Office among the top five attributes that employers look for in prospective candidates.

The three Champions, who will represent the UK and Ireland on an all-expenses paid trip to the MOS World Championship at Disneyland, California in July are:

The National Finalists also worked as a National Team on a music-themed project to collaboratively demonstrate their digital skills using Minecraft and Microsoft Office in a fun and exciting way! Teams presented to a panel of judges from industry (including representatives from Deloitte, Immersive Minds, Microsoft, Tech Partnership, Risual and Universal) for the chance to win the inaugural MOS Four Nations Project Award.   It was extraordinary to see the quality of work produced by the students in such a short period as Team Ireland took home the title and a Surface device each.

In his keynote at the event, Derrick McCourt (General Manager – Public Sector, Microsoft UK) said: “For the UK to be a world-leading digital economy that works for everyone, the next generation must leave school digitally fluent and ready for the world of work.  Through programmes and initiatives to support and transform education, Microsoft is committed to unlocking the potential of young people and preparing them for the jobs of the future.”

“Today’s MOS Four Nations Champions have demonstrated outstanding digital skills using Microsoft tools including Office and Minecraft.  We congratulate them and wish them the best of luck as they blaze a trail for the UK & Ireland at the World Championship.”

Andrew Flood (CEO, Prodigy Learning) added: “Congratulations to each of the Finalists, especially our Champions who will fly the flag for the UK at the World Championship and Team Ireland who won our MOS Four Nations Project Award using Minecraft. These students can be proud of joining a very small elite group, the best of the best in the UK. Today was an inspiring event with our Champions demonstrating their digital, collaboration and problem-solving skills.  The high standard is a credit to the students, teachers and schools involved and highlights great work being done in digital skills and STEM education in the UK & Ireland which we are proud to support.”

For a full selection of images from the 2017 MOS Four Nations Championship Final please click here.