In May 2018, Microsoft Ireland new DreamSpace was host to the Ireland qualifying final of the MOS Four Nations Championship.
Click Here 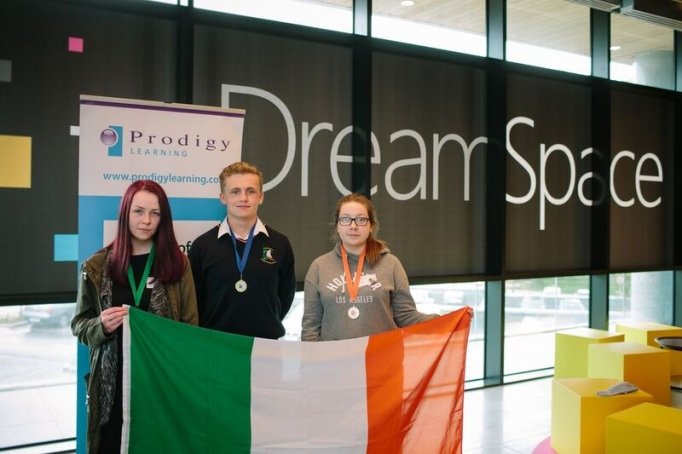 Microsoft Ireland’s new DreamSpace was host to the Microsoft Office Specialist (MOS) Irish Finals on Friday 11th May 2018. The national qualifying final hosted 60 top performing students accompanied by educators from schools all over Ireland for an action-packed day of MOS certification exams, workshops, coding in Minecraft and digital skills.

The Microsoft Office Specialist (MOS) Four Nations Championship launched in September 2017 by Microsoft and Prodigy Learning is an opportunity for students across England, Ireland, Scotland and Wales to prove their mastery of Microsoft Office.

Bianca Bergin (Cork Training Centre, Co. Cork), Saoirse Larkin (Banagher Community College, Co. Offaly) and Jack Shanahan (Colaiste Chill Mhantain, Co. Wicklow) are the 2018 Irish National Champions who have secured their place and will have the opportunity to represent Ireland at the MOS Four Nations next month in London. The ultimate prize for 3 students will be the trip of a lifetime to the MOS World Championship in The Wizarding World of Harry Potter, Orlando, Florida to represent the UK and Ireland.

Since the competition’s launch, thousands of students across Ireland aged 13-22 have taken MOS exams to qualify and compete to claim a place as an Irish MOS finalist. The ‘best of the best’ from these students culminated in the top twenty for each of the categories: Word, PowerPoint and Excel, being invited to the overall Irish MOS Four Nations Final.

At the Final the top performing 60 students sat a further exam in their qualifying category and the winners were crowned by achieving the highest, most accurate score in the quickest time. The MOS Four Nations Irish winners pictured below are:

As well as awards and prizes, including an X-box One S for each finalist and the prestige of being the Irish Champions, the students have been invited to represent Ireland in the UK and Ireland Finals at the MOS Four Nations Final in Design Museum London on 22nd June.

The MOS Irish Finals event was an action – packed day of digital skills learning for students and educators. Along with sitting an exam in their respective Microsoft programmes, Word, PowerPoint and Excel students participated in a Minecraft workshop lead by Peter O’Doherty (Global Minecraft Mentor) and a Microsoft DreamSpace Experience workshop lead by Amanda Jolliffe (DreamSpace Lead, Microsoft Ireland).

The importance of digital skills in today’s job market is indisputable. Independent research consistently ranks skills in Microsoft Office among the top five attributes that employers look for in prospective candidates. This was highlighted by Richard Ryan (Education Programme Manager, Microsoft Ireland) who commented “On behalf of our Microsoft Ireland education team, I’d like to wish the MOS Irish Champions the best of luck representing Ireland at the MOS Four Nations Final in June, congratulations also to all of today’s finalists.”

“Microsoft Education team in Ireland are thrilled to partner with schools and colleges across Ireland to bring innovative ways of teaching and learning to classrooms across the country with offerings such as Microsoft Office Specialist certification.”

“The MOS Four Nations Championship showcases each year the key digital, problem-solving and collaboration skills which equips students for jobs of the future and increases their employability prospects.”

It was a super exciting day with a fantastic range of key digital skills on display, as Billy Breen (Country Manager Ireland, Prodigy Learning) commented: “Out of over 20,000 Irish students who entered the MOS Four Nations Championship we have found the top three MOS Champions to represent Ireland in the MOS Four Nations Final June 22nd. Today’s final was a very inspiring day with the top students across the country of Ireland showcasing their future-ready digital skills. The high standard and impressive scores are a credit to the students, teachers and schools involved as well as the overall standard of digital,collaboration and problem-solving skills embedded within Irish schools.”

The MOS Four Nations Championship offers an opportunity for students across the UK and Ireland to prove their digital skills and be in the running to win fantastic prizes.  The Championship is open to all students aged 13-22 (as of June 15, 2018).  Academic institutions interested in participating should visit www.moschampionship.ie for details.