In May 2017, Microsoft Ireland was host to the Ireland qualifying final of the MOS Four Nations Championship.
Click Here 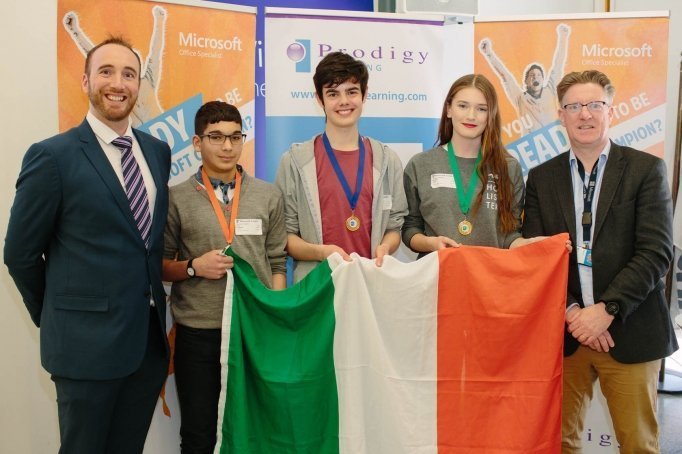 In October 2016, Microsoft and Prodigy Learning launched the Microsoft Office Specialist (MOS) Four Nations Championship for students across England, Scotland, Ireland and Wales to prove their mastery of Microsoft Office. The ultimate prize for 3 students will be the trip of a lifetime to the MOS World Championship Final in Disneyland, California to represent the UK and Ireland.

Since the competition’s launch, thousands of students across Ireland aged 13-22 have taken MOS exams to qualify and compete to claim a place as a Irish MOS finalist. The ‘best of the best’ from these students culminated in the top twenty for each of the categories: Word, PowerPoint and Excel, being invited to this inaugural event for Ireland.

At the Final the top 60 students sat a further exam in their qualifying category and the winners were crowned by achieving the highest, most accurate score in the quickest time. The MOS Four Nations Irish winners pictured above with Billy Breen (Country Manager – Ireland, Prodigy Learning) and Dr. Kevin Marshall (Head of Education, Microsoft Ireland) are:

As well as a number of prizes on the day and the prestige of being the Irish Champions, the students have been invited to represent Ireland in the UK and Ireland Finals at Microsoft’s UK Headquarters in Reading in June.

The importance of digital skills in today’s job market is indisputable.  Independent research consistently ranks skills in Microsoft Office among the top five attributes that employers look for in prospective candidates. This was emphasised by Dr. Kevin Marshall (Head of Education, Microsoft Ireland) who also commented “On behalf of Microsoft I’d like to congratulate all of today’s finalists and wish the Champions the best of luck representing Ireland at the MOS Four Nations Final in June.”

“We are delighted to work with schools and colleges across Ireland embedding innovative ways of teaching and learning supported by Microsoft Education offerings such as Microsoft Office Specialist certification which validates core digital skills.”

“The MOS Four Nations Championship showcases key digital, problem-solving and collaboration skills which prepare students for the kind of careers and the world which will exist when they leave school.”

It was an exciting and inspiring day to see the wide range of students, as Andrew Flood (CEO, Prodigy Learning) commented: “From over 20,000 Irish entries we are now down to three MOS Champions to represent Ireland in the MOS Four Nations Championship on June 13th. Today was an inspiring event with the best students in Ireland demonstrating their digital, collaboration and problem-solving skills.  The high standard is a credit to the students, teachers and schools involved as well as the overall standard of digital skills in Irish schools.”

The MOS Four Nations Championship offers an opportunity for students across the UK and Ireland to prove their digital skills and be in the running to win fantastic prizes.  The Championship is open to all students aged 13-22 (as of June 15, 2017).  Academic institutions interested in participating should visit www.moschampionship.ie for details.