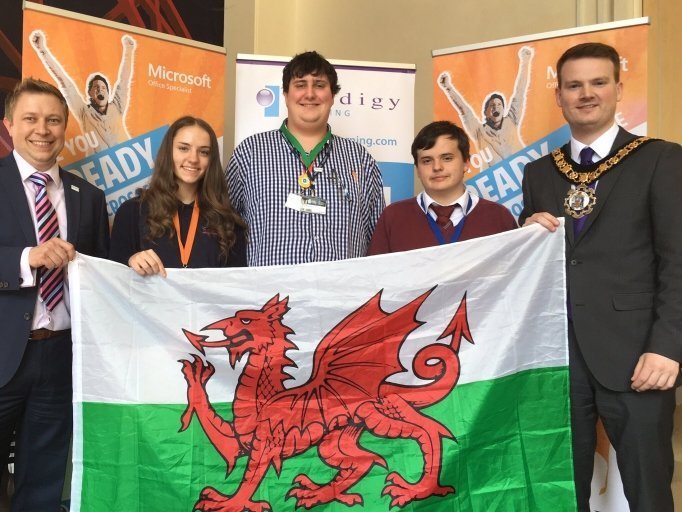 In November 2016, Microsoft and Prodigy Learning launched the Microsoft Office Specialist (MOS) Four Nations Championship for students across England, Ireland, Scotland and Wales to prove their mastery of Microsoft Office. The ultimate prize for 3 students will be the trip of a lifetime to the MOS World Championship Final in Disneyland, California to represent the UK and Ireland.

Treorchy Comprehensive School, Rhondda Cynon Taf in Wales was host to the first of the national qualifying finals days on 6th April 2017 which saw Eleri Evans, Matthew Davies and Sam Conboy being crowned the first ever Welsh National Champions.

Since the competitions launch, thousands of students across Wales aged 13-22 have taken MOS exams to qualify and compete to claim a place as a Wales MOS finalist. The ‘best of the best’ from these students culminated in the top ten for each of the categories: Word, PowerPoint and Excel, being invited to this inaugural event for Wales.

At the Finals the top 30 students sat a further exam in their qualifying category and the winners were crowned by achieving the highest, most accurate score in the quickest time. The MOS Four Nations Welsh winners by category are:

As well as a number of prizes on the day and the prestige of being the Welsh Champions, the students have been invited to represent Wales in the UK and Ireland Finals at Microsoft’s UK Headquarters in Reading in June.

The importance of digital skills in today’s job market is indisputable.  Independent research consistently ranks skills in Microsoft Office among the top five attributes that employers look for in prospective candidates. This was emphasised by the keynote speaker Dr. Michael Ryan from the University of Cardiff.

Dr Ryan shared with the students his academic path, an outline of his research from computer simulations to 3D Printing and how his knowledge and skills in Microsoft Office products has been the foundation. This struck a chord with students and was echoed by Tom (Treorchy student) “I learned the importance of the Microsoft skills from the keynote delivered. It has inspired me to complete more learning activities around the Microsoft exams.”

Martyn Silezin (14-19 Strategy Officer, Rhondda Cynon Taff Borough Council) added: “It was great to see the young people of RCT so well represented in the Wales final.  Not just as a testament to themselves but to underline the valuable contribution RCT teachers are making to the increase in the provision of digital skills. These youngsters will have given themselves a real advantage when it comes to looking for further education or employment by being able to prove their ICT competence.”

The Mayor Rhondda Cynon Taff, Cllr. Rhys Lewis, congratulated all the participants and stressed to them how valuable their experience is and thanked the school for hosting the event. He then crowned the three Champions who will represent Wales at the MOS Four Nations Championship Final.

It was an exciting and inspiring day to see the wide range of students, as Andrew Flood (CEO, Prodigy Learning) commented: “Here we witnessed the ‘best of the best’ students in Wales demonstrating their digital, collaboration and problem-solving skills in order to be recognised as a MOS Champion to represent Wales and take their place in the MOS Four Nations Championship on June 13th. An inspiring event and a very close competition between all the students, a credit to the great work being done in Wales.”

The next nation to host their MOS Championship finals day is Ireland on the 10th May – the gauntlet is down!

The MOS Four Nations Championship offers an opportunity for students across the UK and Ireland to prove their digital skills and be in the running to win fantastic prizes.  The Championship is open to all students aged 13-22 (as of June 15, 2017).  Academic institutions interested in participating should visit www.moschampionship.co.uk for details.

Prodigy Learning, Certiport Global Partner of the Year 2016, is an award-winning provider of IT learning and certification solutions for Adobe, Autodesk, Microsoft and other technologies.  These IT certifications deliver job-ready skills, improving employability for students and productivity for employees.

As the Certiport Solution Provider for the UK & Ireland, Prodigy is responsible for managing, among others, the Microsoft Office Specialist (MOS) and Microsoft Technology Associate (MTA) training and certification programmes.  Prodigy is also a Microsoft Authorised Education Partner and Global Training Partner, supporting academic institutions with Microsoft Imagine Academy and other Microsoft Education solutions.