UK & Ireland Champion has beaten hundreds of thousands of data experts to be named the second-best Microsoft Excel user in the world!
Click Here 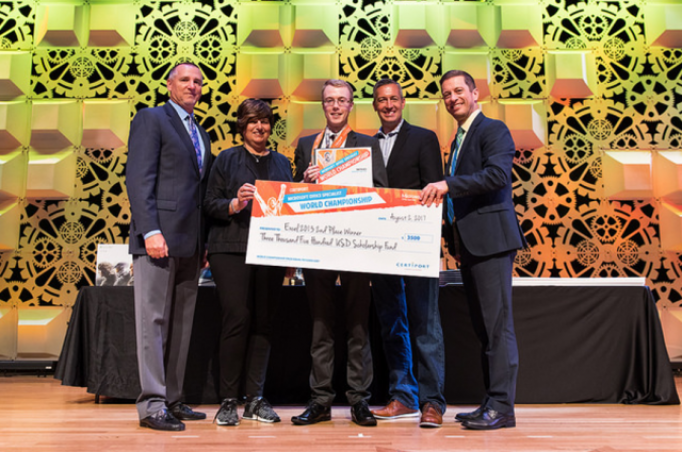 A butterfly recorder from Northern Ireland has beaten hundreds of thousands of data experts to be named the second-best Microsoft Excel user in the world.

Sam Millar (above right), who lives in Belfast, took home a cheque for $3,500 after he was named runner-up in the Excel category of the Microsoft Office Specialist (MOS) World Championship final in Anaheim, California.  The 23-year-old said he would spend the money on getting more certifications.

“Coming second felt too good to be true, and my family are delighted,” he said. “I had to turn three pages of unformatted data into a workbook in 50 minutes, following a precise set of instructions. Luckily it was familiar to me, as I’ve been using Excel to manage my butterfly and moth records since 2009.”

Millar recently graduated from the University of St Andrews School of Biology, in Fife, Scotland, and is currently a volunteer Casual Recorder with Butterfly Conservation Northern Ireland. He also works at the Centre for Environmental Data and Recording, and the Belfast Hills Landscape Partnership, and is learning to code.

More than 560,000 students aged between 13 and 22 (Millar was 22 when he applied) from 122 countries entered the MOS championships, run n the UK and Ireland by Prodigy Learning and supported by Microsoft. The competitors took part in in regional rounds to find the best users of Microsoft Excel, Word and PowerPoint, with 157 winners going through to the three-day final in the US.

Matthew Davies, from Treorchy Comprehensive School, in Wales, took part in the Word category, while Jonathan Foot, from UTC Reading, competed in the PowerPoint section.

“We are proud to support the MOS World Championship and grateful to meet young people from all parts of the world who have discovered the power of Microsoft Office skills for productivity and employability,” said Anneleen Vaandrager, Senior Director of Education Industry at Microsoft. “The competition itself is the experience of a lifetime but every participant, all 560,000 of them, earned MOS certification to bolster their employability opportunities.”

MOS tests are open to anyone, and those who pass receive a certificate proving they are skilled in using Word, Excel or PowerPoint.

Aaron Osmond, General Manager at certification company Certiport, said: “The Microsoft Office Specialist World Championship is inspiring, not only because these students won an impressive award but because they have gained valuable workforce skills that will benefit them throughout their academic and career pursuits.”

“The best part is watching the champions go home and then report back to us with all of the amazing things they are doing academically and in the workforce. Microsoft Office Specialist certification truly changes lives.”