Ormiston Park Academy has been awarded Centre of Excellence status for equipping students with digital skills and qualifications.
Click Here 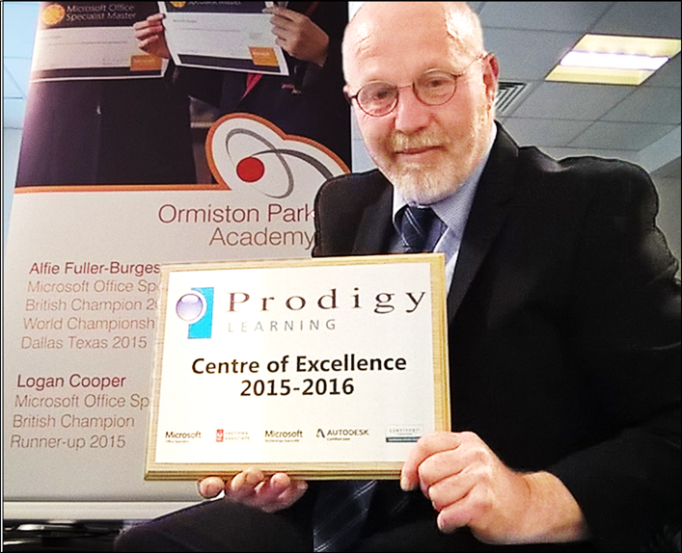 Ormiston Park Academy has been awarded Centre of Excellence status for equipping students with digital skills and qualifications.  The Academy has received this award from Prodigy Learning in recognition of the way it delivers qualifications from industry leaders Microsoft.

The achievements over the year include George Repole’s record-breaking attainment of 9 MOS certifications, Logan Cooper earning runner-up in the UK finals for Word and Alfie Fuller Burgess’ achievements as UK Champion in Word and taking part in the world finals in Dallas last Summer.

Andrew Griggs (Country Manager, Prodigy Learning) said: “It is a great pleasure to be presenting Ormiston Park with a Centre of Excellence Award.  This award is presented by Prodigy Learning to recognise exceptional performance in delivering internationally recognised IT certifications from industry leaders such as Microsoft.”

Prodigy Learning awards Centre of Excellence status annually to a small number of centres in the UK & Ireland to mark the delivery of over 250 IT certifications in the year and high standards of achievement.

Laurence Boulter (IT Infrastructure Lead, Ormiston Park) added: “We are very proud of our status as a Microsoft IT Academy and even more proud of those pupils who earned those 250 professional certifications over the last year.”

“This year we have offered the opportunity to parents, carers and families of Ormiston Park pupils to complete the online MOS course and Prodigy Learning are great partners to have in an initiative like this. We also have our fingers crossed with one pupil already qualified for this year’s UK finals next month and I have seen test scores that make me optimistic about at least another UK contestant. You never know, we might not have seen the last of Alfie and Logan yet!”

Ormiston Park officially opened as an Academy in September 2009, replacing its predecessor school the Belhus Chase Specialist Humanities College. It is an 11-19 mixed academy, sponsored by the Ormiston Academies Trust.

Microsoft Office Specialist (MOS) certification is the world’s most recognised computing qualification for proving a person’s skills and abilities in Microsoft’s Office applications.