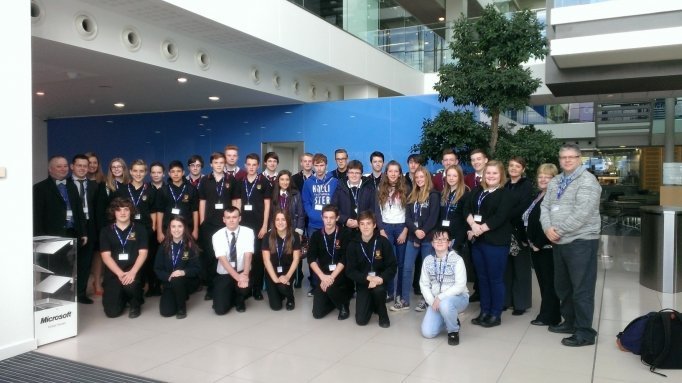 On November 4, 2014 Microsoft UK hosted the RCT Microsoft Office Championship Finals Day which was an exclusive Microsoft Office Specialist (MOS) competition for schools from Rhondda Cynon Taf (RCT) Council in Wales. The event was sponsored and organised by Prodigy Learning, Certiport and Microsoft.

RCT has partnered with Microsoft to provide the Microsoft IT Academy programme to all of its 132 schools in the council, to increase technology skills for both teachers and students and to help prepare students for a career in the 21st Century.

30 students from across RCT qualified for the finals by achieving the highest scores in MOS Word, Excel and PowerPoint and travelled with their teachers to Microsoft to compete to be the RCT Champions. Throughout the day, the students were given the chance to tour the Microsoft UK Campus and take part in coding activities.

At the event the students also sat MOS examinations in Word, PowerPoint and Excel. By studying for these qualifications, students have developed the key ICT skills to help them be more productive with business productivity tools, enhance their employability and CV’s as well as supporting them on the path to lifelong learning. The MOS certifications validate those skills that will help distinguish them from the competition for future employers.

The top three students from each application category received fantastic prizes to take home, such as the Nokia Lumia 1020. The scores the students received were outstanding. Craig Bewley, (Director, Prodigy Learning), told the students how “impressive their results were, there are few young people who would be able to match their ability!”

RCT’s passion to boost young people’s professional skills was demonstrated through one of their teachers, Paul Greene, winning a prize from Prodigy Learning for his school delivering the mos MOS certifications as part of the competition.

All of the students present on the day were also entered into the MOS World Championship, a brilliant competition where students from around the world compete against each other. Students who make it through to the finals win an all-expenses paid trip to Dallas!

Martyn Silezin (Project Manager, RCT) rounded off the event to say how he was “Really proud of all the kids from RCT, this is the future! It’s a wonderful opportunity for to get a real life experience from a top class company. Big Thanks to Microsoft.”

The timing of this event and partnership with RCT could not be better. A recent report from the BBC spoke about 620 new IT jobs that will be created in the South of Wales over the next five years. The demand for IT and Developer skills has never been more prominent. A recent IDC study also highlights Microsoft Office as the #3 skill in demand by employers today and being #2 for high growth and high wage occupations.