The Top three Microsoft students from across the UK & Ireland have beaten over 30.000 student entrants and scooped the main prize of a ticket to the USA this summer to compete at the Microsoft MOS World Championship Final.
Click Here 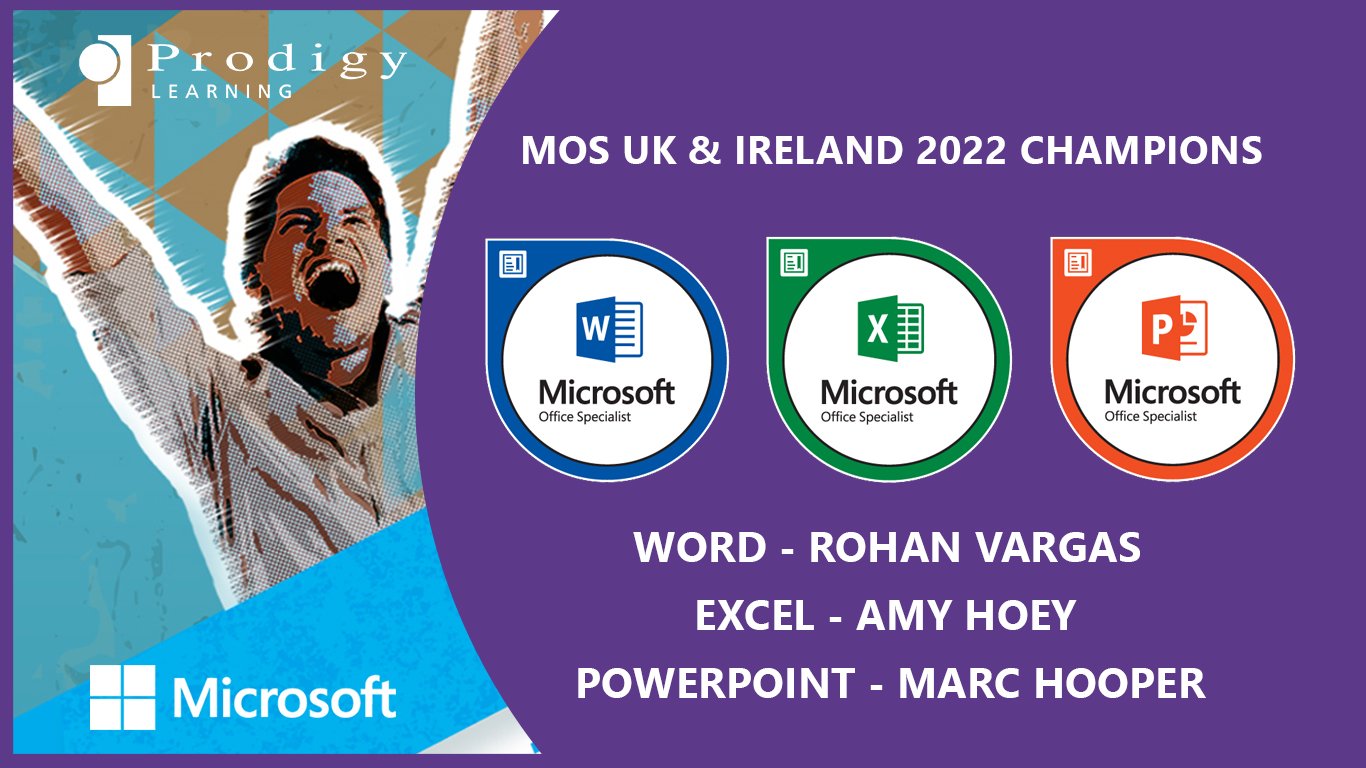 The Microsoft MOS winners beat over 30,000 student entrants from across the UK & Ireland in Microsoft Office Word, Excel and PowerPoint to win the trip of a lifetime competing and representing the UK & Ireland at the MOS World Championship Final in the USA.

Today, the winners of the 2022 Microsoft Office Specialist (MOS) UK & Ireland Championship have been announced by Microsoft Worldwide Education and Prodigy Learning during an exciting virtual final.

The MOS Championship attracts more than 30,000 test-takers from across the UK & Ireland each year. Students, aged 13 to 22, competed with peers to prove their digital skills in Microsoft Word, Excel and PowerPoint. The top 30 finalists were invited to the final where they sat a Microsoft Office Specialist (MOS) Certification Exam.

There could only be three winners. Using the top score method, the MOS UK & IE Champions 2022 (who each win a trip of a lifetime to go to Anaheim, USA to compete in the MOS World Championship Final from 24th-27th July 2022) are:

Congratulations to all three students on a fantastic achievement!!

“Each year the Microsoft Office Specialist UK & Ireland Championship is a standout event, it is incredible to see the top talented students showcase their mastery of business productivity and Microsoft Office Skills,” said Jeff Johnson (Senior Business Development Manager, Microsoft Worldwide Education). “For these students, beating over 30,000 peers competing from across the UK and Ireland to be in the virtual final, is a fantastic achievement, proving they are leaders of the future. They have earned valuable industry recognized certification representing a bright future for our industry and a solid foundation.”

“We’re proud to recognise and celebrate the best of the best digital skills at the UK & Ireland MOS Championship Final each year. Crowning these inspiring, young Champions who will represent the region at the MOS World Championship Final in Anaheim, USA in July 2022 is always an honour. Certification and participation in this final will stand out on their CV’s and be a key to successful academic and career pursuits!” said Andrew Flood (CEO, Prodigy Learning). ‘Congratulations to Rohan, Amy & Marc on an incredible achievement, we know they will be leaders in the future’’.