US Launch Coding in Minecraft 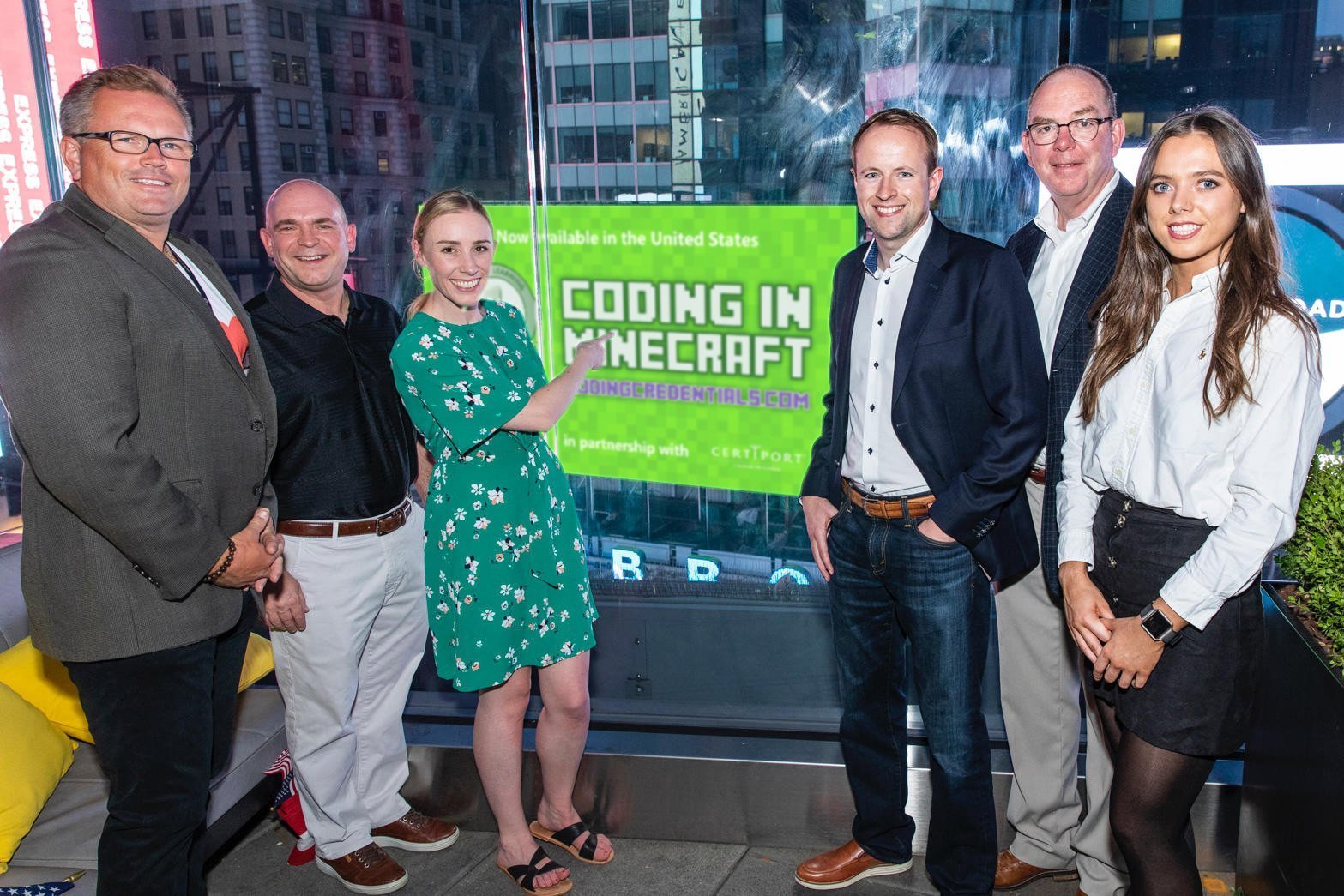 US Launch Coding in Minecraft

Certiport, a Pearson VUE business, and Prodigy Learning, today announce the worldwide launch of Coding in Minecraft at the Certiport Global Partner Summit taking place at the New York City Marriott Marquis.
Developed by Prodigy Learning, Coding in Minecraft is a new computer science curriculum, skills assessment and credential program delivered through Minecraft: Education Edition with assessments hosted on Microsoft’s Azure cloud computing platform. According to Microsoft, Minecraft is the best-selling video game of all time and 51% of U.S. children age 9 to 11 play the game.

The program provides teachers with a revolutionary end-to-end teaching and assessment solution for their students to develop and prove skills in coding. Certiport will distribute Coding in Minecraft initially in the United States and then through the 12,000 Certiport Authorized Testing Centers worldwide.
Prodigy Learning developed Coding in Minecraft to engage school children from age 9 to 16 in computer science through game-based learning. With Coding in Minecraft, children are introduced to coding through an immersive, collaborative and creative learning environment that opens opportunities to fulfilling careers in technology. By earning evidence-based credentials, students are prepared for industry recognized certification programs such as Microsoft Technology Associate (MTA).

Engaging students in computer science from an early age is a growing challenge worldwide. The U.S. Bureau of Labor Statistics reports a major shortage of computer science graduates for the 1.4 million computer science jobs that will be available by 2020, with less than a third of these jobs likely to be filled by qualified graduates. A 2018 Microsoft/YouGov survey of K-12 teachers in the United States found that 2 out of every 10 teachers said their students were not taught computer science at all, with the lack of a supporting computer science curriculum being one of the primary reasons given.

“Our vision for Coding in Minecraft is to break down the barriers for students and teachers to increase uptake of computer science in schools,” said Andrew Flood, CEO of Prodigy Learning. “By immersing the curriculum and assessment in Minecraft: Education Edition, we capture the imagination of young learners through one of the most popular games in the world and support them to learn to code, design and problem solve. The program is designed to be delivered in a teacher-facilitated model, making it easy for teachers of all abilities to deliver computer science in their school.”

The Coding in Minecraft program is comprised of three courses that include a curriculum, Minecraft World, assessments, and evidence based micro-credentials to position students to continue their path to a rewarding computer science education and industry certifications. The first two courses use block-based coding in MakeCode and progress learners to the third course using text-based coding in JavaScript with courses in additional popular coding technologies in development.

The curriculum has been aligned to teaching and computer science standards in the U.S. (Computer Science Teachers Association-CSTA) and the U.K. (Ofqual).

“We are pleased to be working with Prodigy Learning to support the Coding in Minecraft credentials as a precursor to additional computer science study and certification programs,” said Ray Murray, Vice President and General Manager – IT, Pearson VUE. “By exposing children to coding at a young age, educators can increase the number who love computer science and encourage them to continue on to earn more advanced coding certifications such as Unity, Microsoft Technology Associate, App Development with Swift from Apple and more.”
Commenting on their experiences in using Coding in Minecraft, Nicole Roche, a teacher from the Davis School District in Utah who piloted the program, said: “Prodigy has created an amazing and engaging way to learn coding through Minecraft. The students are engaged and eager to use a platform familiar to them. With Prodigy’s easy to use curriculum and their provided worlds, the students can explore with the teacher or at their own pace.”

The product is already inspiring students to learn computer science. Martyn Silizen, a Strategy Officer from Rhondda Cynon Taf Education Authority in Wales where the first students worldwide achieved their skills credentials through Coding in Minecraft, commented: “97% of students who have completed a Coding in Minecraft credential expressed an interest in going on to study computer science at a higher level as their next step on their learning journey.”

Coding in Minecraft is hosted on the GMetrix platform which leverages the power of Microsoft Azure. The GMetrix platform makes it easy for educators to manage student progress, provide formative feedback and award the credential upon successful completion of all assessment objectives.

For access to a free demo and to learn more about Coding in Minecraft visit: http://www.codingcredentials.com.

Prodigy Learning (Prodigy), is a multi-award winning global EdTech business providing digital skills certifications and learning solutions for Adobe, Autodesk, Microsoft and other technologies. These IT certifications deliver job-ready skills, improving employability for students and productivity for employees. Prodigy was established in 2000 and now has offices in Dublin, Ireland, London, UK and Sydney, Australia. To learn more, visit https://www.prodigylearning.com.

Certiport is the leading provider of learning curriculum, practice tests, and performance-based IT certification exams that accelerate academic and career opportunities for learners. Certiport provides certification development, delivery, and program management services through an expansive network of more than 12,000 Certiport Authorized Testing Centers worldwide. More than 3 million Certiport exams are delivered in 26 languages across 148 countries each year throughout the academic, workforce, and corporate technology markets. Certiport is a Pearson VUE business, and is a part of the world’s leading learning company, Pearson. To learn more, go to http://www.certiport.com.

“Certiport” is a registered trademark of NCS Pearson, Inc. in the United States and other countries. The names of actual companies and products mentioned herein may be the trademarks of their respective owners.

“Minecraft” is a trademark of Mojang Synergies AB. Not an official Minecraft Product. Not approved by or associated with Mojang.